By viewing this site you agree to our use of cookies.

Weymede is an estate of 141 houses built in the mid 1960s on the border where Byfleet morphs into Weybridge and set in 15 acres of private, fully enclosed landscaped garden featuring a wide variety of mature trees and shrubs. The estate benefits from its own totally private frontage to the river Wey and is perfectly situated for Weybridge or New Haw stations, Mercedes Benz World, Brooklands museum/shopping and fine local schools. The unique environment of Weymede is protected by legal covenants administered by a committee of volunteer residents.

It is, in short, one of Surrey’s best kept secrets

The Concept of Span

“Ever wished you lived somewhere where a sense of community still existed, where kids could play safely outside and neighbours were friends, not strangers? Well, places like this do exist: they’re called SPAN developments.” Grand Designs Magazine - 2005

Span housing was the inspiration of two young men who, during the 1930’s, met as architectural students at the Regent Street Polytechnic, London. Eric Lyons and Geoffrey Townsend both had a keen interest in modern architecture. Townsend set up his architectural practice in Richmond, Surrey in 1937 with Lyons joining him a year later. Their work was interrupted by the Second World War but they rejoined again in 1945 to set up a practice in Hampton Court, Surrey. Their aim was to build modern and imaginative buildings. In 1953 Townsend resigned the practice to set up his own development company to build Span homes.

Span, the organisation formed by the melding of architectural and landscape talents of Lyons and Cunningham and the development capability of Townsend & Bilsby built over 2000 modern homes in London, Kent, Surrey and East Sussex.

The basic tenets of a Span home are in part a reaction against the “mock tudor” so prevalent in post war architecture, part as an illustration that individually designed and affordable homes could be built in the middle ground between large council estates and mansions for the wealthy and to prove that planned estates could be genuine communities.

A typical span house used new construction techniques and featured open plan interiors with large areas of glass and would be integrated into the Cunningham designed landscape where “the architectural quality of the village will be achieved by the close relationship between building and landscape”. This relationship is protected by covenants administered by a committee of management most commonly drawn from volunteer residents. 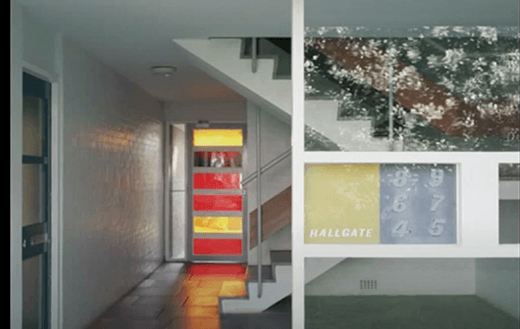 Living in a Span home 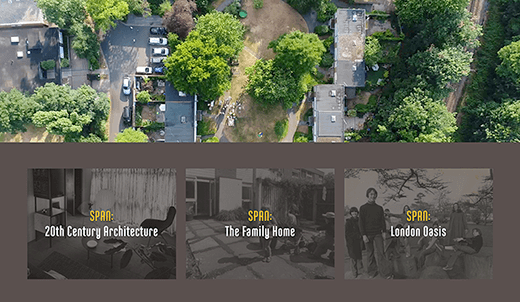 More than 50 years after it’s inception Weymede now boasts a mature landscape that few similar developments can match. In keeping with the original concept, houses intermingle with trees and greenery with car parking placed out of direct line of sight. Given it’s position and facilities Weymede truly is an ideal space for families.

Weymede is particularly communal by dint of it’s unusual tenure arrangements where the householder owns the footprint to their property outright but, along with their 140 fellow householders, jointly own the landscape surrounding the houses.

This has absolutely no impact on your freedom to, from and within your property but their are restrictions in place to preserve the environment that all Weymede residents are justifiably proud of.

A fuller explanation of this can be found on the “Rules” page but a conveyancing lawyer could be failing in their duty to you if this was not adequately explained.

Weymede is bordered on two sides by river and wood so one cannot see much of the estate from any public highway. It is however well situated for access to amenities both local and beyond. A walk of a minute or so takes residents to a completely private stretch of the river Wey, a perfect spot for a stroll, walking the dog and summer picnics. It is also an angling hotspot untroubled by over fishing.

Still on foot and just beyond Brooklands wood that is Weymede’s northern border is 60 acre Brooklands Park with remnants of the banked motor racing circuit, community play area, skate park and sports areas. Just beyond that is the Brooklands Museum celebrating the area's history of motor sport, transport and aviation industries.

Mercedes Benz World opposite is a free to access petrol head and Formula 1 heaven. More mundane but no less important a stroll from Weymede to the largest food shopping complex in the area takes less than 10 minutes. Further afield but still on foot, Byfleet and New Haw railway station is 15 minutes away and Weybridge station can be reached without once walking on or crossing a road.

In a car, junction 11 of the M25 is less than 10 minutes away (traffic permitting) and both Heathrow and Gatwick are nearby. A drive of less than 30 minutes takes you to the heart of the Surrey hills, an area of outstanding natural beauty.

To maintain the unique environment of Weymede, a Covenant detailing restrictions to alterations to the exterior of Weymede houses and to the communal grounds that they sit upon are in place.

The covenants are a legally binding agreement between an individual house owner and the Weymede Residents Society which carries title to the common parts of the estate. This Society itself is owned jointly by all 141 Weymede houses owners who all have an equal share.

An example of a restriction is that no vehicle is permitted to regularly park anywhere on Weymede land if it is sign written or in excess of 1.67m in height.

It is important that anyone considering living on Weymede be aware of what these restrictions mean in practice before they do. A conveyancing lawyer has a duty to explain these principles. The four download documents to the right provide all of the information required for a lawyer to conduct conveyancing and to advise their clients. 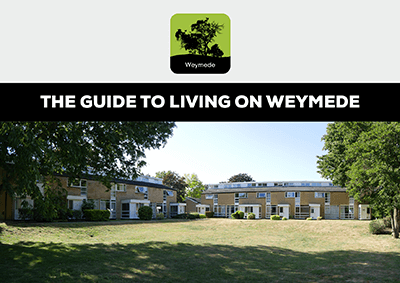 A simple guide to living on Weymede 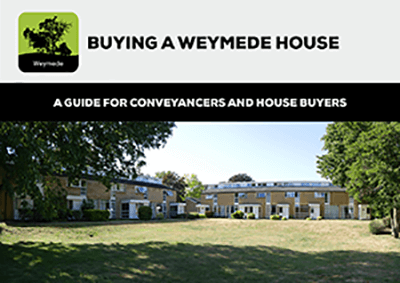 Buying a Weymede house. For Lawyers and laymen

The communal areas of Weymede are owned by the shareholders of the Weymede Residents Society (ie: all Weymede house owners).

Each year at an AGM, Society members elect a small committee of volunteer residents to act as directors for and as the management team for the society.

This small team is mandated by residents to preserve and maintain the development’s grounds and public spaces and to ensure that the rules and restrictions in the Covenant are observed.

Management and maintenance of a large area of lawns, mature trees, a private river bank, walls fencing and hard standing is funded by a mandatory monthly maintenance charge. Details of this rate and charge are detailed in the download documents on the previous page.

Weymede has been managed by resident volunteers since it’s development in the 1960’s. The current team and brief descriptions of their roles are shown to the right.

Leader of the committee team.

Overall responsibility for all matters financial pertaining to Weymede

Maintenance of company records and compliance with relevant legislation and regulation. Field general queries from residents. Manage agenda/minutes for all meetings committee or general

Supervision of the care of 15 acres of private grounds at Weymede.

The general maintenance of the public areas encapsulating road and paths, lighting, plumbing, and electricity. Tendering for and monitoring of services and contractors to ensure best value for residents. Control and execution of the painting budget.

Security of public areas, surveillance of compliance to covenants with regard to parking, signed vehicles, tax discs and waste bins. Collaboration with sub committees over events.

Management of general communication, keeping residents up to date and informed of events, works, estate maintenance and issues.

The authoritative guide to the span concept and it’s history. Hardbound with 256 pages and lavishly illustrated it is required reading for any Span enthusiast and will impress under any coffee table.

Self published by James Strike, a resident of Field End, a Span estate, this little book aims to capture the spirit of the Span movement using as it’s focus the Field End site.

The Guardian: Let’s move to..: article